What Girls Are Made Of tells the true story of the performer's years as an indie musician with everything along the way, featuring a live band playing classic songs from Nirvana, Radiohead and more

Renowned writer, director, actor and musician, Cora Bissett returns to Belfast next month with her latest show, What Girls Are Made Of, at the MAC for five nights from May 1-5.

Following an award-winning, sold out premiere at Traverse Festival 2018, What Girls Are Made Of comes to the MAC as part of a UK and worldwide tour, before heading to Brazil and the USA.

Written and performed by Cora Bissett, co-creator and director of the acclaimed Glasgow Girls, which visited the MAC in 2017, What Girls Are Made Of takes audiences back to 1992 to tell the autobiographical story of Cora’s rollercoaster journey from Fife schoolgirl to indie singer.

Directed by former Traverse Artistic Director, Orla O’Loughlin, the show celebrates the euphoric highs (touring with Radiohead, partying with Blur) and epic lows (untrustworthy managers, £40,000 debt) of Bisset’s young life, poignantly interspersed with the personal losses and gains of her adult life. Now a mother herself, Bissett draws from her own teenage diaries to question what wisdom we should pass on to the next generation, and which mistakes we should let them make for themselves.

Performed with a live backing band and packed full of '90s indie tunes from Nirvana, Blur, Sultans of Ping, Radiohead and Throwing Muses, What Girls Are Made Of promises to be a fun night out, bringing audiences on a trip down memory lane and giving them an insight into what life in the music industry is really like. 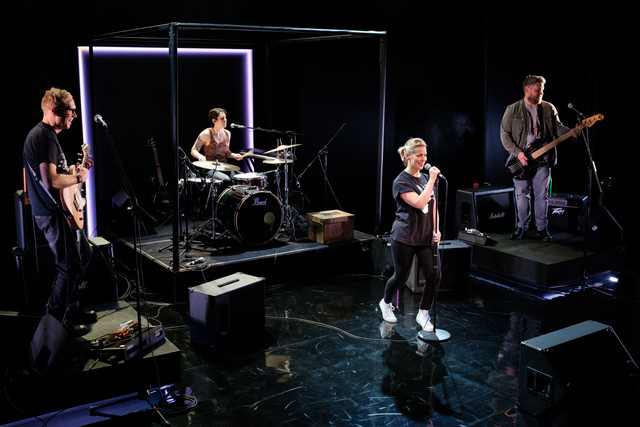 Speaking about the show, Cora Bisset said: ‘I never imagined that last year when I started wading through the old diaries and piecing together this story into a play, that we would end up this year with a tour traversing Scotland and Northern Ireland and ending up in Brazil and the USA! I'm really excited to take the show on the road and particularly back to my old home turf in Fife, where I was born and went to school.

'The play starts in Glenrothes and charts my teenage self, looking for the big adventure that life might hold. I was overwhelmed by the response we got in Edinburgh last year, where it seemed to resonate with everyone from teenage girls, to middle-aged men and women with teenage kids, and to older people who felt that teenage self rekindled. It seemed to be everyone's story.

She added: 'It tickles me that a story about an indie kid from Fife somehow clicked with theatre programmers in Sao Paulo and South Carolina, who want to share it with their audiences. Maybe that's because, although it speaks in broad Fife-isms, it also speaks in universalities. It's about growing up, and not wanting to be anyone's puppet. It's about making big leaps of faith and failing monumentally. It's about searching in the dark for years for what the hell you're meant to be doing. It's about losing loves, losing faith, losing parents, losing weight, hitting the depths and working out how you build yourself back up again. It's about being a girl, bringing up a girl, trying to be a woman, and trying to work out how to pass something on that is actually useful. It's about celebrating imperfection, not homogenisation. It's human, it's truthful, it's a total 'riddy', but it's life, and it seems to be a bit about us all. Maybe that's why we are touring from Fife to far, far away. I can't wait to see how audiences take to the show in different corners of the world.’