The market for Shakespeare tends to go in phases. 2018 was definitely the year of Macbeth – or The Scottish Play, as the superstitious would prefer - with bloodstained daggers, witches and moving forests rampaging across stages and screens all over the world. 2019 is fast turning into the year of A Midsummer Night’s Dream, the most performed play in Shakespeare’s weighty repertoire and the subject of an entire programme on BBC Radio 4 on this very day.

Two new productions are opening in Belfast during the next few weeks - Terra Nova’s large-scale intercultural version at the Queen’s Hall in Newtownards (May 2 to 5) and Open Arts’s specially adapted and abridged version (April 26/27 at the MAC), which concentrates on the subversive magic, wonder and artful imagination swirling around a leafy forest in the course of a single surreal night.

Arriving into the foyer of the Crescent Arts Centre, there is no need to ask for directions to the rehearsal room. It's simply a case of following the sound of laughter. With just a week to go before opening night at the MAC, the Open Arts cast and production team are in fine fettle. Under the close eye of the team of professional tutors, the actors are running through the pivotal scene in which Titania, queen of the fairies, falls prey to the plotting of her jealous king Oberon and his mischievous acolyte Puck. Anointed with a strange, hallucinatory potion, Titania awakes and falls instantly in love with the first living being she claps eyes on - a grotesque, donkey-like creature, who, in his previous life was the self-important ‘rude mechanical' Nick Bottom, a local weaver. Together they capture both the humour and poignancy of this ludicrous pairing.

Titania is played by Michelle Porter, a professional actress, whose career was interrupted by a significant deterioration of vision and a corresponding loss of confidence. She has worked with, among others, Prime Cut Productions and, in 2012, appeared in the company’s highly acclaimed site specific piece, The Baths, set in Belfast's Templemore Baths and directed by Louise Lowe. Her background and training are clearly in evidence in the quiet competence with which she handles Gerry McBride’s sprightly text, which places the fairy world right at the core of Shakespeare’s thickly layered storyline.

She is well matched by Anna Kyle’s hilarious and fearless Bottom, whose body language, braying laments and newly assumed tragic-comic persona are very skilfully portrayed. Kyle, too, is an experienced performer, who, six months ago, wrote and presented her own one-woman show It Only Takes a Minute, which was produced by c21 Productions. It is a courageous portrayal of her experience of living for years with undiagnosed Asperger’s syndrome. After a lifetime of struggling, socially and physically, with this inhibiting condition, Kyle discovered acting and proclaims it as her salvation. 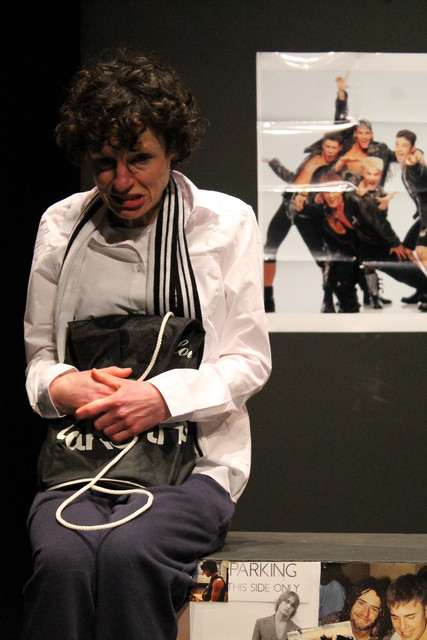 Anna Kyle in c21's It Only Takes a Minute

In a Belfast Telegraph interview shortly before the play's opening, she said: 'Through acting, I discovered I could be someone who wasn't me. It was a release. I could be out there and be someone else. I loved it. That escapism was wonderful. Having Asperger's makes me very sensitive and I think that helps me see and read situations from a slightly different perspective. It gives me a different insight, which is kind of attractive in acting.'

The character of the imperious Oberon is played by Gareth Smyth, who has been blind since childhood. He is a gifted singer and a long-time member of the Open Arts Community Choir. This is his first appearance as an actor but he has taken to it like a duck to water. Because of their impaired eyesight, he and Porter need a helping hand around the performance space. Smyth has at his right hand McBride’s sure-footed, quick witted Puck, while Porter’s chaperone is young Tanya Shaw, a trained ballet dancer, who floats across the stage en pointe, tenderly guiding Titania through forest and flowery glade.

The motley crew of artisans – the so-called mechanicals - are played by an equally assorted trio of performers, comprising a DJ, a librarian and a rugby coach. Darren Murphy, who plays the role of Robin Starveling, is a regular with Streetwise Community Circus and is a talented juggler. In this version, Starveling is a hat maker rather than a tailor, so the audience can expect to see much juggling of hats.

Open Arts was set up in 1992 as one of the first arts and disability organisations in Northern Ireland. Under its founder and first director Kate Ingram, it has gone from strength to strength, engaging thousands of people in high quality arts events and activities. It sets high standards of creative excellence and involves the participation of professional tutors and freelance workers, with and without disabilities. In keeping with Ingram’s original vision, six out of its eight Board members have a disability, as do two core staff members and a number of committed assistants, who are engaged in helping to deliver the year-round programme. 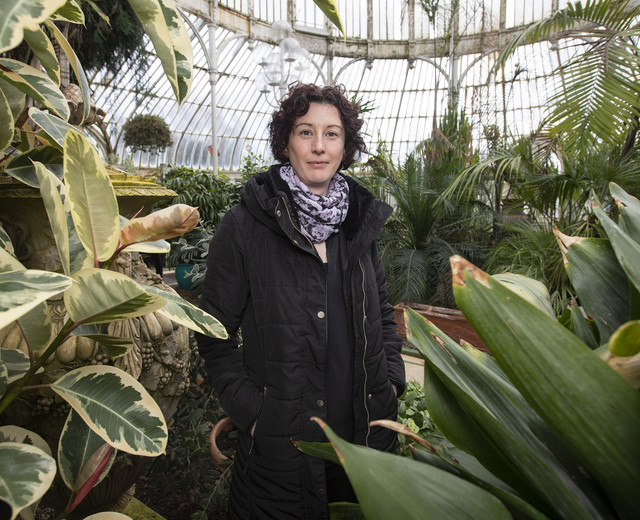 Ingram’s tenure came to an end in 2013 after 21 years at the helm. She remains closely involved, however, as one of the percussionists of the Open Arts Javanese gamelan. She was succeeded as Chief Executive by Eileen Branagh, a theatre studies graduate of Ulster University, who previously worked at the Cathedral Quarter Arts Festival, the Belfast Festival at Queen’s and the Beat Carnival. The latter started out as a freelance contract for the duration of the East Belfast Lantern Parade, which, she says, was meant to last 30 days and turned into a ten year stay. She had worked alongside Ingram at Open Arts and says that when the job of Chief Executive was advertised she was convinced it had her name on it. That conviction is evident in her dedication and ambition for the group’s ongoing artistic programme and her pleasure in the positive effects the company’s very existence has had on individual lives.

'We are becoming more and more ambitious in our performance pieces,' says Branagh, speaking on the sixth anniversary of her arrival in the top job. 'Our last production was an adaptation of Ravel’s L’Enfant et les Sortileges under the title The Spellbound Boy. It's a one-act fantasy opera, which turned out to be very challenging but very successful. When as a group we started talking about the next one, I tentatively suggested Shakespeare and everyone looked horrified. They were frightened by the prospect. I was inspired by the film version of A Midsummer Night’s Dream with Calista Flockhart and Michelle Pfeiffer and Rupert Everett, which was so much fun. When we started examining Shakespeare and others saw the film, they sensed the play's mischievous spirit and could see the possibilities for a large scale ensemble piece bringing together all the art forms Open Arts practices.

'We referred to the Animated Tales of Shakespeare for this condensed and adapted version, which remains very truthful to the original text. It removes a lot of the courtly scenes and places the emphasis on the mysterious world of Oberon and Titania, the fairies and the mechanicals. Gerry McBride, who plays Puck, has written a great new opening scene, which sets up the story without a lengthy exposition. We've been working on this piece since the summer of 2017 and are really delighted with the way it has come together. Strong friendships have been forged and people have found themselves discovering new talents they never knew they had.'

Some 65 individuals are involved in this multi-media production. They include actors, dancers, singers, visual artists, writers and musicians. The cast is entirely made up of people who have a range of disabilities from physical to sensory problems, learning disabilities and mental health conditions. Open Arts’s regular groups – Luminous Soul dance company and the Monday Players drama group - have joined hands with its Community Choir and the Javanese gamelan, which has been at the heart of its activities for many years. The visual art group has been responsible for the design of the publicity flyers and poster, which vividly encapsulate the vibrant colour and magic of the production. 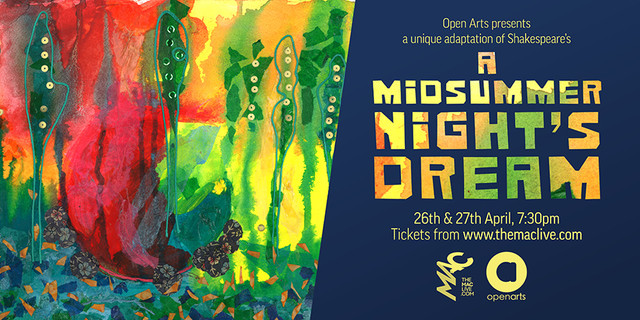 Launched in March during Shakespeare Week - the annual UK-wide celebration organised by the Shakespeare Birthplace Trust, which gives primary school aged children their first encounter with Shakespeare's characters, stories and language – this Open Arts production will run on the main stage of the MAC on 26 and 27 April. And already plans are afoot to bring it back for a longer run later in the year.

Open Arts has long flown the flag for access for all to the arts in Northern Ireland and the joy generated in the rehearsal room speaks volumes for its power to connect and engage. Its important place in the creative sector is endorsed by Gilly Campbell, head of community arts and education at the Arts Council of Northern Ireland. 'Open Arts is a remarkable arts organisation,' she says. 'It is vital, not least because it provides opportunities for people with disabilities to access and participate in the arts, but also because it provides a platform for people to make friends, learn new skills and increase confidence and self-esteem.'

Tickets for A Midsummer Night's Dream are available to book at https://themaclive.com/event/a-midsummer-nights-dream. For more about Open Arts visit http://openartsni.org/.