Shining a light on the art of set design

With another award recognising his technical work in theatre, lighting and set expert Ciaran Bagnall tells us how he acquired the skills to make a career out of the craft

Ciaran Bagnall is tired but buzzing with pride when we chat, shortly after The Man Who Fell To Pieces had its first, enormously well-received outing at The MAC. He is set and lighting designer on the play, written and directed by Patrick J O’Reilly, which marked the beginning of the first ever EdgeFest, a series of thought-provoking productions and special events centred around mental health and emotional struggle and turmoil.

The mini theatre festival is a collaboration between Tinderbox Theatre Company and Prime Cut Productions and continues until March 3 with showings of East Belfast Boy and Every Day I Wake Up Hopeful, which both opened earlier this month.

Bagnall is an associate artist for Prime Cut and describes the company as his 'theatrical home'. 'I lived and worked in the south of England for 12 years, but the plan was always to go away, learn the skills of my trade and then come home,' he explains. 'I always believed a lot in Irish theatre and what it had to bring to the world – we’re world class in so many aspects. I knew I wanted to come home and it was actually a Prime Cut theatre show that brought me home.'

A conversation with Emma Jordan led to Ciaran working on her directorial debut, Denis Kelly’s After The End in the OMAC. Just over 10 years later, both she and Bagnall are winners in The Irish Times Theatre Awards, which took place in Dublin on Sunday. The John Logan play Red – which Emma directed and for which Ciaran designed the set and lighting - took home four of the six awards it was nominated for, including Best Director and Best Set Design.

Shortlisted also for Best Lighting, Bagnall remains modest about his triumph, preferring to shine the light on the supportive women around him – namely Jordan, who he describes as his 'theatrical sister and hero', his wife Jen, daughters Emily and Roisin, and Clare Vidall-Hall Management, his agent in London.

It’s vital recognition of a career he loves but admits has been 'hard work', made even harder by the seemingly endless assault on arts funding. However, Bagnall believes the pressure has galvanised the creative community in Northern Ireland. 'I think it’s making the work and the people stronger,' he says, 'Certainly as a community of people, of artists, it’s bringing us all together because we are all in the same boat. It’s that siege mentality – we’re protecting what we do and proving what we do under difficult circumstances.'

His path to becoming a professional lighting designer was – somewhat unusually for the creative industries – a relatively traditional one. Having fallen in love with lighting design and stagecraft at the age of 15, his careers teacher in Abbey Grammar in Newry advised applying to the Royal Welsh College of Music and Drama. He began his studies there in 1997, completing a degree in stage management.

Philadelphia, Here I Come! at the Lyric Theatre, Belfast

Bagnall says, 'They have lighting design degrees now, but they didn’t have any of that in my day. I specialised in lighting design and from that I literally got my first job straight out of college.' He joined the lighting department at the Leicester Haymarket Theatre, followed by five years freelancing in London, and continues today to work on productions in England.

Ciaran is also a talented artist, and it was during an exhibition of his paintings at a theatre in Leicester that director Iqbal Khan asked him to consider set design. 'We spoke a bit about it and he offered me Madame Butterfly in London, which I took as it was very much a design that was led by light. So, I used lighting design almost as an architectural element, like a part of the set.'

Some people take clear, vocational paths into creative industry professions and others find their calling by happy accident – as you can see, Bagnall’s career path is a lovely demonstration of both. For those considering working in theatre in Northern Ireland, he says the theatre family in this country will be generous with their time and knowledge – but you need to have a real passion for it, and do your homework.

'I think we in the industry have a role to play with younger people coming into it – to pass on our knowledge and be open with them as to what it’s like. The theatre world is very open for people to come along and see the work and see how its produced.

'The most important thing is that you enjoy theatre and have a genuine interest. Go and watch stuff, read plays – if you can’t afford theatre tickets, you’ll still find so much online. If you meet someone in the industry and they can see that interest in you, they will bend over backwards to help you.

'A hunger for it will make you stand out. If I can see a passion from somebody, I will do anything I can to help. You can only teach people so much – you can’t teach them passion.' 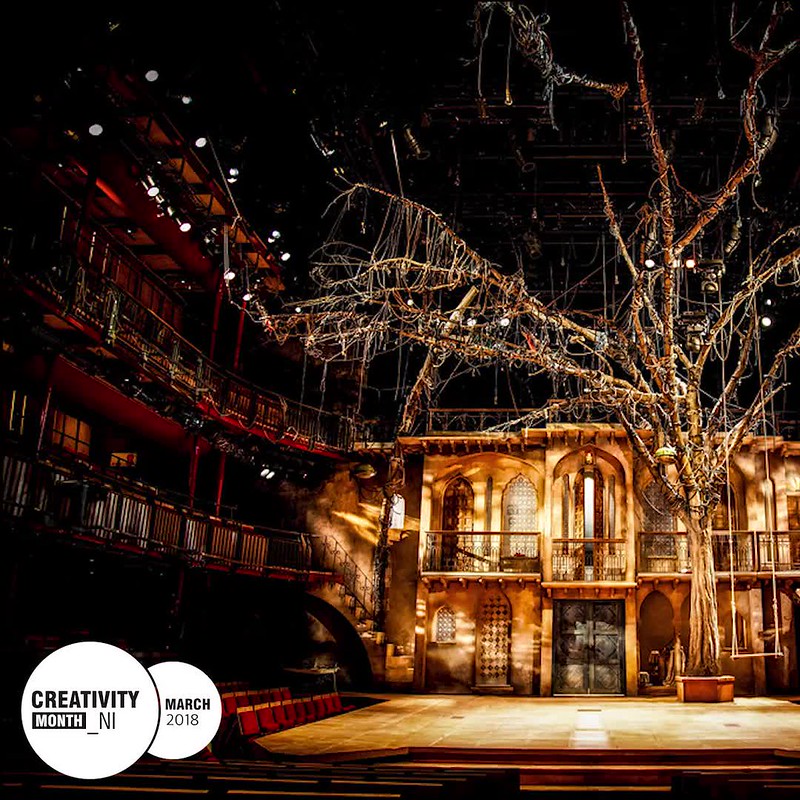 This article has been published as part of Creativity Month 2018, themed around 'careers in the creative industries'. To see this year's programme of events running throughout March, click here.

All images courtesy of CiaranBagnallDesign.com