Urban murals and graffiti marketing may be a current craze, but for the 'Belfast Banksy' it's a passion that's taken perseverance and a positive outlook to turn into a living

Street artist Glen Molloy has no illusions about the reality of his craft. Working in the open air (as he does in almost all circumstances) means battling Northern Ireland’s notoriously inclement weather, something which is far from conducive to optimising one’s artistic inspiration.

‘If you’re in this for yourself, for the glory and the glamour – because street art is very en vogue at the minute – you’re going to be very disappointed,’ he says, recalling the fact the he has spent a good deal of the last few weeks grafting in the snow.

‘I’m not in this for a quick buck – there’s a lot of hard work,’ Molloy continues. ‘For the last two months I’ve been living on the edge, fulfilling art work with time and the weather against me. It’s not all just a walk in the park.’ He concludes that there is nothing glorious about ‘standing out in the rain, painting, with the wind blowing all around you and your paint not working.’ 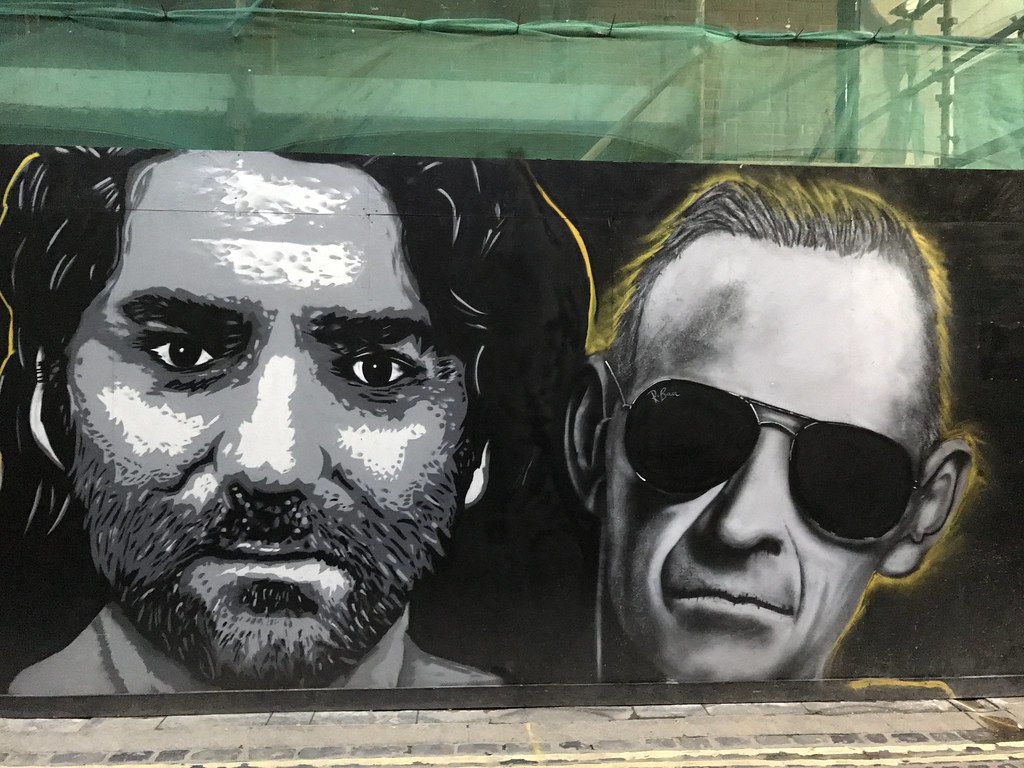 Nevertheless, in spite of this pragmatism, the 47-year-old east Belfast native finds much to be positive about in the niche he is presently carving out for himself. With a background in graffiti (though he has no formal education in art), and a résumé taking in jobs as varied as call centre staffer and DJ, Molloy feels that there is something especially fulfilling in his current career path, one which he has been following now, seriously and commercially, for well over year. He references the ‘feast or famine’ nature of his existence, living ‘to the penny’ one day and waking up to substantial offers of work the next: ‘I’m not painting for one section of people, I’m not painting to be trendy. I’m painting to survive.’

Though recognition has come his way relatively recently, he boasts murals focusing on a range of subjects in an impressive back catalogue: martial arts legend Bruce Lee; MMA superstar Conor McGregor; any number of Game of Thrones characters; and more specific socially conscious images highlighting the dangers of alcohol and drugs. His work has even been featured on the BBC and in Reuters, Agence France-Presse and The Economist.

Molloy has also captured local boxing icons Carl Frampton and Michael Conlon, men he labels ‘ambassadors for the country who have fought against the sectarian divide and who both sides welcome.’

As to his ‘weird’ technique, he describes himself as not really having a style, ‘but you can tell it’s me. I do a graphical style that people can confuse for stencils but, essentially, it’s all freehand. Most of the things I’m painting I’ve never painted before, never mind drawing them. I’m basically throwing myself in at the deep end and going for it.’

Current and past commissions have come from a range of private and public sector organisations. His work with the Northern Ireland Housing Executive seeks to transform and enliven the often scarred environs of Belfast’s more deprived areas. ‘I do like to go out and do something that’s a gift to the city,’ he says, ‘I want to give people a start to the day with a nice piece of art.’

Considering that approach to social regeneration to be a worthy pursuit, no matter how challenging the mechanics of the process, Molloy suggest that ‘it uplifts the area. It turns a dull, blank, forgotten space, or something that’s badly damaged, into a focal point for a community... People living in those working-class areas, they know that the paramilitaries are in charge. They don’t constantly need to be reminded by a large gable wall celebrating a victory over the other community.’

He continues: ‘What I’m trying to do with my work is get it into the areas where it can matter the most. You know, the areas that have suffered from paramilitarism, sectarianism, political problems, racism. Really I’m trying to re-image,' adding 'it’s more about the community and what my contribution can be to it.’

What advice, then, does Molloy have for young aspirants? He urges the next generation to study the masters, from Rembrandt and Picasso to Turner and Constable, and aim to render more than ‘pretty pictures’. He believes that some street art can be aesthetically pleasing, though true meaning can often be found lacking. ‘You want something that’s genuine. You want it to be sincere.’

Keeping a positive attitude is just as important. He advises developing practitioners to maintain ‘a very, very positive attitude. It’s not always going to be a celebration but your hard work will pay off.’ He is just as adamant that one must ‘keep in the frame of mind that you’re going to get somewhere with it in the end, regardless of setbacks. Keep the chin up.’

Molloy points out that the ‘major part of being a creative is that you have to put the effort in. Nobody’s just going to come to you because you can do this. It’s about your determination and dedication, and the way you come across to others.’

‘Do your homework,’ he says, and ‘never be afraid to start again.’